CBC News Sunday interview with Victor Malarek on prostitution and his book “The Johns, Sex for Sale and the Men Who Buy It”.   . 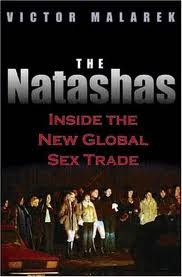 In his new book highlighting the men who patronize the world’s oldest profession (or oldest system of entrenched abuse, as the author sees it), Victor Malarek unveils some seriously seething male anger directed at “empowered” women.

In a chapter called “Monster Woman”, Malarek quotes the most articulate of the lot. One man, writing on-line in an anonymous johns’ forum, theorizes:

Since time, man has tried to please woman. As woman gets more, woman wants more. Stupid man gives more. So today we find ourselves stuck with this monster woman. Does she appreciate what the man has done? No, “give me more”!

Now, to continue to the next step: now female turns into hippo. Yes, no more whales in the sea. They are walking on land.

The result is overweight female, dictating to man. Tell me: are we so hard up that we need an overbearing, self centred, dictator female to rule us?

Well, after 3 marriages, losses of over one million dollars total, I am seeking an ASIAN female. Why? Because they respect man, they give to man, they live for man.

Woman CIOs, CEOs, and COOs are popping up everywhere in direct competition with men whom they’ve been convinced are not smart enough or good enough or rich enough….They are everywhere with hordes of aspiring replacement in their wake.

In an interview, Malarek, a Toronto-based TV reporter who makes documentaries for W5, seemed genuinely surprised by the john’s anger. He noted that massive numbers of Canadian men from all economic classes and education levels patronize sex-trade workers. And he estimates that 90 percent of those who do are acting out of rage, rather than simple male horniness.

In part, Malarek blames the proliferation of exploitative prostitution—especially the prostitution of trafficked and developing world women—on North American male anger at feminism and the equality of women.

For more on Malarek’s book, see this week’s issue of the Georgia Straight, which will be distributed across Metro Vancouver and published on Straight.com on Thursday (April 23).

Nevada Pimp Dennis Hof Accused of Sexual Assault, Won’t Face Charges…One of Those Assaults Was Against Me – The Bunny Ranch Insider!